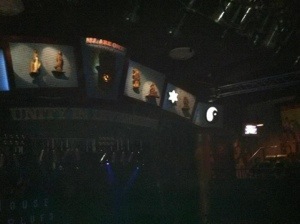 The pictures above are displayed above the proscenium at the San Diego House of Blues, with “Unity in Diversity” written beneath and “All Are One” above.

Certainly, all are not one.

From the little I know about world religions, pretty much all the major ones are symbolically depicted. There’s Catholicism, Buddhism, Hinduism, Judaism, Brahmanism, Islam, and several other isms I didn’t recognize.

Unity in Diversity. All are one.

I’m not sure what they’re trying to get at with that, but I’m going to go ahead and call BS on the slogans.

Diversity in the symbols depicted, certainly. There’s yin/yang, the star and crescent of Islam, and many other statues and symbols except 1.

I didn’t see a cross.

Jesus has become persona non grata for much of the world, and representing the instrument of His death and mankind’s hope in a place where secular and sometimes even evil music shakes the roof on an almost daily basis could be seen as ***gasp*** favoring mainstream Christianity.

Followed by headliner Jeremy Camp, who turned a very unlikely place and a few hundred strangers into a church service (no video for his set. I was busy worshipping).

It was a great and amazing evening, and the whole point of writing this is simply to say I am continually blown away when I see firsthand how God can use anyone at any time.

During the pre-show Q&A and meet-and-greet, Jeremy Camp was humble, and kind, and very funny. He answered everyone’s questions honestly and straightforwardly, even taking time to lay hands on a young man and pray for healing for him.

The music was great, and the word was proclaimed. During Overcome, Jeremy even had hundreds of strangers link raised hands in praise to the one who’s worthy.

The smartest and best thing Camp said came toward the end of the evening, when he had very little voice left. He looked out over the crowded floor and said “the best thing I can tell you is ‘read your bibles.'”

Simple advice, perhaps. But also the best thing we can do in a world where diversity and “tolerance” are valued far more than the sacrifice of an obscure Nazarene carpenter.

Hear o Israel, the Lord our God, the Lord is one.

You can think what you want about diversity, and Christianity, and political correctness, but you will still be just as lost if you fall for that “all is one” nonsense.

All are not one.

You can serve God or not.

If not, you’d best be prepared to face the consequences.

As for me and my house, we will serve the Lord.

Jen and I went to the Wednesday night youth service last night, and it was really good, even from the cheap seats. This particular service was a little heavier on music than usual, but the music was awesome, led by Sam. 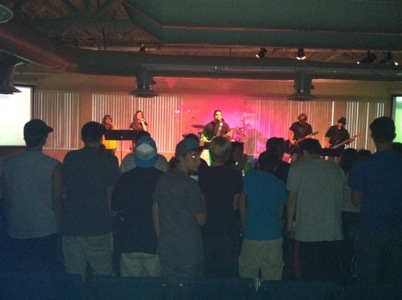 It was probably one of the more memorable evenings at church I’ve had in some time. What made the night stand out for me was not what I would have expected.

Sam and the band were great, and Zeb’s sermon was convicting (I’m sure he was talking directly to the old guy in the back row), but it was this young man next to Jen that got to me.

I know him a little, and he’s a really great guy. He’s probably only a year or two removed from youth group himself, but I don’t think I know another person of any age I’ve seen worship with such abandon.

I was truly in awe of this young man’s total submission to God during the service. We didn’t speak last night, but every time I would glance in his direction he was worshipping on a level I’ve never gotten to. Raising his hands, singing at the absolute top of his lungs–it was a beautiful thing. Just him and God.

I hope I can get to that point. I want to praise and worship like that–as if no one else is in the room.

As it is, I’m probably a little beyond self conscious when it comes to worship. I’m not one of those people who is unaware of his own presence in a room. I’m typically one of the largest people there, and if I kicked it up more than a little during worship time, I’d probably look like a manatee having a grand mal seizure.

So I usually just chill out and do my own thing, even though I sometimes feel my own thing is not necessarily the best I can give God.

The young man last night was definitely giving it all he had, and didn’t give a rip about who was in the room, and whether or not they were paying him any attention (though people downstairs may have heard him singing).

It was a great night, and gave me lots to think about. Plus, Magen was holding a really cute puppy.