In the wake of this business in Manchester, I’ve been wondering something: is anyone beyond redemption? Should they desire it, of course.

If it were up to me, I’d say some people are. People who harm children, for one. I think about these youngsters in England, having hardly begun their lives. I think of these…terrorists, seeking them out with intent and purpose. I think of men like Jerry Sandusky (the Penn State “coach” and chicken hawk ) and others of his ilk. If it were up to me, people like that would have no possibility of redemption. Only justice.

The answer I found was not what I wanted to find. I wanted my position to be justified–I wanted to be right.

People who do evil things should be punished–period. And perhaps society and the law will punish them. Yet punitive punishment sometimes seems like it should be eternal. At least it does to me.

Thankfully, it isn’t up to me. Here’s what just a few scriptures say about redemption, and who can be redeemed:

Ephesians 1:7, “In him we have redemption through his blood, the forgiveness of our trespasses, according to the richness of his grace.”

Colossians 1:20-22, “And through him to reconcile to himself all things, whether on earth or in heaven, making peace by the blood of his cross. And you, who once were alienated and hostile in mind, doing evil deeds, he has now reconciled in his body of flesh by his death, in order to present you holy and blameless and above reproach before him.”

Romans 3:24-26, “And are justified by his grace as a gift, through the redemption that is in Christ Jesus, whom God put forward as a propitiation by his blood, to be received by faith. This was to show God’s righteousness, because in his divine forbearance he had passed over former sins. It was to show his righteousness at the present time, so that he might be just and the justifier of the one who has faith in Jesus.”

Titus 2:14, “Who gave himself for us to redeem us from all lawlessness and to purify for himself a people for his own possession who are zealous for good works.”

Isaiah 44:22, “I have blotted out your transgressions like a cloud and your sins like mist; return to me, for I have redeemed you.”

Those are just a few verses, and there are many more. The short version is that the answer to my question is “no one is beyond redemption, should they choose to be reconciled before God, with God, because of the blood of Christ.”

No one. That’s why he came, and did what he did. I may not like it, but that ability to redeem when most find it all but impossible to simply forgive…well, that’s what makes him God.

My inabilities and my shortcomings in that way are why I need him–why we all do. We can’t be God–only God can do that.

Redemption is possible for all people.

I took a picture a couple of years ago, and the object I was photographing nearly took my breath away with its subtle beauty. I looked at it again today, and it made me think of how easy it is to find beauty when you least expect it.

I also saw the image above, and it took my breath away, too. 20 men–all ostensibly believers–about to die for nothing more than believing in a God a large group of extremists hate with a violent passion.

I have seen a lot in my life. There has certainly been a lot in the News this year–plenty for Conservatives and Liberals to chew on, and get angry about. For my part, the image at the top is the most terrible thing I have seen all  year, and maybe all my life.

These men are Egyptian Christians. Taken captive by ISIS for more or less doing nothing other than worshipping what this group of individuals thinks is the wrong God. I think the terrorists called this video something like “A message signed in blood to the People of the Cross.” Erudite, these people are not.

I found the image online, as well as an article and an accompanying video I will never be able to unsee. I didn’t intend to watch it, but the article mentioned the men crying out at the end, and I felt compelled to bear witness to that. They are marched down a deserted beach, and made to kneel on the sand. The man in the camo with the knife gives his shpiel and  near the end, mentions who the men are (without naming any of them), and what’s going to happen to them. He tells them to cry out to their God. They do cry out here and there, and then are forced into a prostrate position, and their heads are sawed off with knives.

There was even a link to an article quoting Pope Francis that mentioned the men crying out to Jesus in their last few seconds.

They really did die for their faith. Scripture promises they will be raised up again in Revelation 4. After Jesus, I want to meet these people and others who died for the God they believed in (I am not numbering the multitudes of idiots who blew themselves up for Allah among them).

Anyway, that image really made me think–long and hard–about what’s coming. I know many of you don’t believe in a literal bible, and that’s your choice.

That doesn’t change what’s coming, for those who believe and those who do not. In the movie Return of the King, Aragorn says something to Théoden like “Open war is upon you, whether we would risk it or not.” And that’s where we are today. It doesn’t matter much what the President chooses to do (or more accurately, not do), I don’t think.

And I have been wondering all year, what would I do for my faith?

Will I die for it?

Would I cry out for Jesus as some jackal with a knife executes me?

And then I’ve been wondering where all the beauty in the world went off to? Is there any left?

Turns out there is, and it’s everywhere. The world is terrible and wonderful at the same time. And amongst all the strife abroad, or here at home, there are nuggets of beauty among the ashes. I will do my best to consider the beauty that still exists, and the God that has a hand and heart in everything. And I will wait for whatever is coming, knowing that I will not go through it alone.

The image at the bottom of this post is what I was talking about at the beginning. I took it on a patch of dirt and gravel, next to a pile of old and rusted metal and a dumpster.

Beauty amongst trash. It exists. And it’s comforting. It comforts me because to me, in my heart and mind–it is evidence that God also exists. I didn’t need it, but it’s wonderful to see.

And it makes the rest…more bearable.

Not everyone dressed like this is a terrorist, or (according to the Federal Bureau of Investigation) radicalized Muslims. A hijab and a taqiya are just articles of clothing. 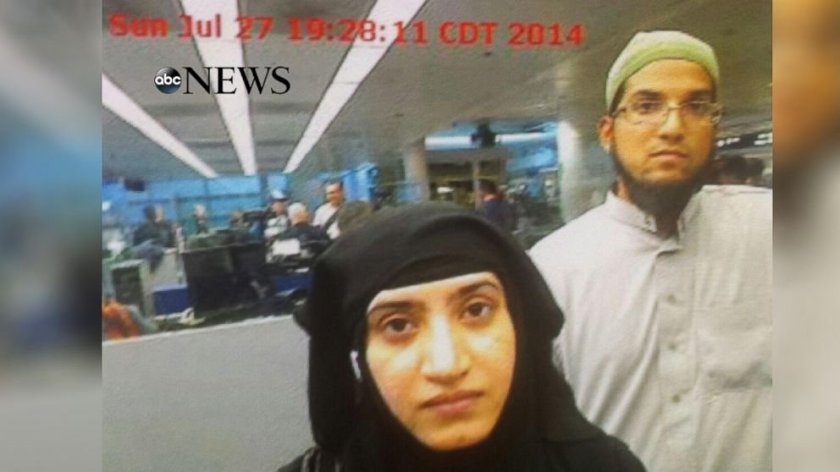 These people were, however, and did carry out their plan, although probably not to the degree they wished, thanks to a hail of bullets and a tactical vehicle.

For some reason—although they were known to the FBI very soon after their deed was done—it was determined by someone not to release information regarding their identities right away. I can actually imagine why without straining my brain too hard. The powers-that-be did not want to create anti-Islamic paranoia while blood was still hot over what had been done, which was, of course, murder motivated by terrorism and perpetrated by people taken captive by a hateful ideology.

No, I am not talking about the GOP. In spite of what many of our liberal friends might think.

(I am not planning to address Donald Trump’s remarks here. That’s for another post)

Personally, I do not know any practitioners of the Muslim faith. No, I do not believe they all want to kill me. I would say, of course, that some do. It would be foolish to deny that.

But certainly not all, and nowhere near a majority.

That said, what do we do? Do we round them up? Kick them out of the country? I don’t know. It makes me think of Japanese internment during WWII to an extent, and that was wrong. It feels the same way here.

Radicalized Japanese people were not coming to the U.S. under a peaceful guise and murdering people at office Christmas parties.

Also, I understand how left-leaning purveyors of social justice might be worried about citizens getting all exclusion-y and prejudiced regarding Islamic people in the U.S. I get that—and they probably should worry, to an extent. Many people do and say stupid things, especially when people have been murdered.

I don’t know what the answer to that is. I don’t know how to keep people from feeling like they are the arbiters of justice, social or otherwise.

I think this is a dialogue the country needs to (and hopefully will) have.

But I also think it is liberal-minded folly to behave as if NO Islamic extremism has occurred in the U.S. since 9/11.

Sure, the U.S. can be held captive by ideology, too. It isn’t just GOP, though. Extremism exists in every country, every faith, and it is beyond dangerous.

I’m just trying to recall the last time folks from the U.S. got dressed up in their cowboy hats and baseball caps and took their game to Islamic countries….nope, I got nothing.

We just need to stop denying what’s going on. And we need to have a reasoned conversation, and not a blame party. Are we honestly supposed to believe San Bernardino was because of the NRA? Come on, folks. Pretending there is no danger domestically, doesn’t mean there is not. It just means it isn’t only ostriches who bury their heads in the sand.

Let’s put our respective agendas aside, and figure this nightmare out.