In the wake of this business in Manchester, I’ve been wondering something: is anyone beyond redemption? Should they desire it, of course.

If it were up to me, I’d say some people are. People who harm children, for one. I think about these youngsters in England, having hardly begun their lives. I think of these…terrorists, seeking them out with intent and purpose. I think of men like Jerry Sandusky (the Penn State “coach” and chicken hawk ) and others of his ilk. If it were up to me, people like that would have no possibility of redemption. Only justice.

The answer I found was not what I wanted to find. I wanted my position to be justified–I wanted to be right.

People who do evil things should be punished–period. And perhaps society and the law will punish them. Yet punitive punishment sometimes seems like it should be eternal. At least it does to me.

Thankfully, it isn’t up to me. Here’s what just a few scriptures say about redemption, and who can be redeemed:

Ephesians 1:7, “In him we have redemption through his blood, the forgiveness of our trespasses, according to the richness of his grace.”

Colossians 1:20-22, “And through him to reconcile to himself all things, whether on earth or in heaven, making peace by the blood of his cross. And you, who once were alienated and hostile in mind, doing evil deeds, he has now reconciled in his body of flesh by his death, in order to present you holy and blameless and above reproach before him.”

Romans 3:24-26, “And are justified by his grace as a gift, through the redemption that is in Christ Jesus, whom God put forward as a propitiation by his blood, to be received by faith. This was to show God’s righteousness, because in his divine forbearance he had passed over former sins. It was to show his righteousness at the present time, so that he might be just and the justifier of the one who has faith in Jesus.”

Titus 2:14, “Who gave himself for us to redeem us from all lawlessness and to purify for himself a people for his own possession who are zealous for good works.”

Isaiah 44:22, “I have blotted out your transgressions like a cloud and your sins like mist; return to me, for I have redeemed you.”

Those are just a few verses, and there are many more. The short version is that the answer to my question is “no one is beyond redemption, should they choose to be reconciled before God, with God, because of the blood of Christ.”

No one. That’s why he came, and did what he did. I may not like it, but that ability to redeem when most find it all but impossible to simply forgive…well, that’s what makes him God.

My inabilities and my shortcomings in that way are why I need him–why we all do. We can’t be God–only God can do that.

Redemption is possible for all people.

My Pastor is currently preaching through the book of John, from beginning to end. He hasn’t gotten to this section yet, but today I was reading ahead and a few things occurred to me at roughly the same time:

Jesus had just been crucified. His mother and those close to him had borne witness. They’d also seen the soldiers who’d done it rolling dice at his feet for possession of the tunic he’d been wearing because they didn’t want to tear it so each could have a piece. Did they recognize something about him, that they would want his bloodied clothing? Maybe, but it didn’t slow down their efforts.

Jesus looks down and sees his family (blood family and in Christ) looking at him and he realizes there are his brother (from another mother) and mother seeing him in his final moments.

His brother. His mother. And though it does not say so specifically, I think that the disciple Jesus loved and the mother of Jesus realized that sometimes family isn’t blood. Sometimes family is heart, and spirit, and love. The words of Jesus cause them to realize the truth of this.

The other thing I thought about was to realize some of the last thoughts of Jesus as a man–just prior to his death–were to think of his mother. To provide for her, because he knew his time on earth (at that time) was short.

He thought of his mother, while he hung on the cross.

I thought about my own mother, when she was dying. I don’t know what her last thoughts were, but the very last word I ever personally heard her say was to me, in reference to my presence in her hospital room. She’d asked, “where’s Tommy.” I told her I was there, and she said “good.”

So obviously, considering this weekend, I was thinking about my mother.  I wish I’d thought about her more–appreciated her more–when she was here for me to appreciate and to show love to.

It made me think that all of our time is short, and we shouldn’t waste any of it. I know I will one day have the chance to tell my mom what is in my heart, and what was in my heart at 18 (though hopefully not for a while!).

Please allow me to drop this little bit of wisdom.

Don’t wait to speak love and appreciation to your mothers. Do it now.

I only have a few pictures of my mother. I don’t remember much about when she wasn’t sick. But I think this pic shows what I want to say. Now I’m older than my mom was in the photo, and I’m younger in the picture than my son John is… 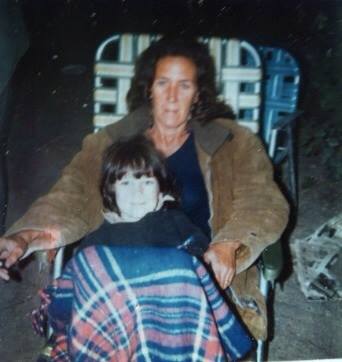