There’s been so little good going on in the world lately, today I decided that was what I wanted to talk about–something good. Except what had I done that was good? What was the best thing I’d done? I knew I’d made a ton of mistakes.

Ken and Linda came to San Diego for a visit, and we went to Old Town to look at the sites and have some Mexican food. I decided that would be the day I said something to them about wanting to marry Jenny.

We did Old Town for a while, and we had lunch at some place whose name escapes me. I think that night, we also took in the Christmas program at Shadow Mountain Community Church, where David Jeremiah preaches. I remember when I attended there, the Christmas programs were quite extraordinary. I don’t remember the one we saw with Jenny’s parents, though, because I was kind of nervous, knowing what was coming later.

We stopped to get something to eat at Denny’s on the way back–it was the first place Jenny and I had eaten together–right before going to the zoo, and we had breakfast. So that night, it seemed like a good enough place to go with her folks for a late dinner. About halfway through, I decided that Jenny needed to take David to the restroom, and I would text her after I talked to her mom and dad.

After a minute or two, I mumbled something out–I don’t remember what I said. I do remember that Linda did one of those fist pumps people do. “Yes!” The only problem was that I forgot to text Jenny and tell her to come back. She must have waited five minutes in the Denny’s bathroom with her chicken sandwich getting cold.

Worked out for the best, though. At least I think so.

Now that the talking part was out of the way, we actually had to get engaged. I began formulating big plans for that. There would be a horse. An expensive dinner at Seaport Village. Clowns and balloons–Ok, maybe not that. But if you have a cliché in mind regarding a marriage proposal, I was going to do it.

Only one problem–I found out a couple days later, that was the annual Whitson family Christmas. There was nothing I could do–I couldn’t tell her that it was marriage proposal weekend. It would have ruined the surprise. So I drove to Yuma that Saturday, as I always did. It was around lunch time, and I knew everyone was already there, or would be soon.

I had to pick up the ring at the jewelers (it had been sized), and it wasn’t ready yet. So I walked over to the Walmart a couple of stores over to kill some time. I stood in the book aisle and read the ending of Marley & Me (see, I have a dark side. But I didn’t know what would happen to the darn dog at that point), and was soon puffy-eyed and teared up over the grave-digging scene. Big mistake.

Eventually, I secured the ring and went to Ken and Linda’s. The party was already on, and soon after it was time for gifts. The ring was in my pocket in a little ziplock baggie, wrapped in white tissue paper. Jenny and I were sitting on the blue and white “love seat,” and eventually, I figured “what the heck?” I went into the bathroom to fish the ring out of my pocket. I came back and gifts were just about done. David was across the room, and Jenny’s brother and wife were standing with their back to us. Her grandma was on the big couch, but wasn’t looking at us. I told her I had one gift left. I started to kneel, and said something stupid, like asking her what she was doing for the next 50 years or so. 4 year old David crashed into us right then–exactly then. I realized Grandma Marie HAD been looking after all. I slipped the ring on her finger, and that was the beginning of the best thing I’ve ever done. The smartest thing I’ve ever done. 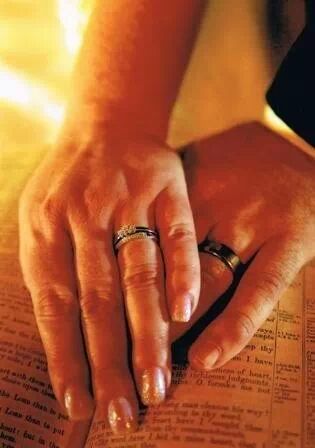