Anyone who’s seen much of 2016 would have to acknowledge that quite a few celebrities have checked out this year–and there’s still almost a week to go, so there could be more. What I’m thinking about today, having just heard about Carrie Fisher, is not Princess Leia. It’s George Michael. Why, you might be wondering? I know little of his music, and that video with the “Choose Life” shirts? My goodness. Before I continue, watch/listen to this…and think of the portly doofus in that picture below.

My George Michael/Wham! memory is from an audition for a musical I did back in high school. I did OK on the acting part, and didn’t embarrass myself singing–as part of the chorus, anyway–I didn’t do a solo. The problem was the dancing.

Anyone who knows me knows I lack even the smallest gracefulness. 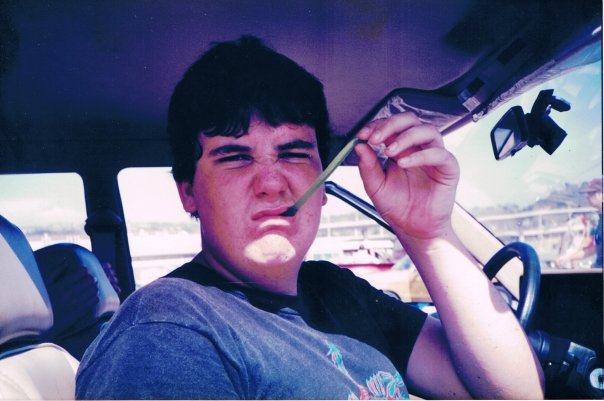 Yes, I’m that guy. Many pounds and many years later. But dancing was part of the audition. One of the cheerleaders (Mona Nicholson) came up with a short, choreographed routine to the Wham! song Wake me up Before You Go-Go, which was a pretty big hit for George and his silent, guitar “playing” partner. I’m sure he had a name, but I don’t want to look it up.

So there we are–a handful of guys–on the tarmac outside the gym where the play would be performed. We’re standing there while Mona (yes, she was attractive) demonstrated the few steps for us. All I could think of at the time was to pray that no one saw me. The finger-snapping, “Jitterbug!” intro to the song came on and my humiliation began.

My hands/arms were held out from my sides like I was playing a drunken airplane running in a loose circle. I put the “boom-boom” into no hearts that day. I am tall. I am clumsy. And I demonstrated that fully on that 80’s afternoon. 85? 86? I can’t remember that part.

Maybe if any of my friends from those days read this, they can help me fill in some time gaps. I feel like it was springtime of 1986. Anyway, I’ll remember that time as long as I live, even if it isn’t the most masculine thing I’ve ever done.

I also remember there was this big number toward the end of the title song, “The Pajama Game.” We all had to wear pajamas for that last song. Someone (I have my suspicions) decided it would be funny to hide my pajama top. I searched frantically for it, but in the end had to “borrow” one from somebody that was about five sizes smaller than my own. Years later I would see Chris Farley crooning “Fat Guy in a Little Coat,” and it made me think of that. I had to raise my arms and do jazz hands at the end, looking like an obese genie that had just popped out of a bottle of Crisco.

I think my sisters came to the performance, but my mom didn’t, that I can remember. She was alive, but without much health or energy left. Probably a good thing–I put a hurtin’ on that pajama top.

So when I think about George Michael, I think it’s sad he’s gone–I think it’s sad when anyone shuffles off this mortal coil. But I don’t think of his hit songs from the early 90’s when his image comes to mind. I think of that white tee-shirt emblazoned with “Choose Life.” I think of stuffing my midriff into a third grader’s pajama top.

So “adios,” George. Thanks for making my 90 seconds of horror possible.