I don’t always agree with the things said by Glenn Beck, but this seemed an apt enough way to describe those crazy kids of the Islamic State, especially after their latest adventure:

“It is time to wake up. This is the enemy of all mankind. Make no mistake, this is a global jihad and it has everything to do with “their” religion and their fundamental interpretation of the Koran.

Jews, gentiles, straight, gay, black, white, western, eastern, atheist, Christian or Muslim — it is time you recognize what you are up against, look it square in the eye and call it by its name: evil and a plague on mankind”

Burning a man alive–a fellow Muslim, I might add–in a cage is brutality of a level not easy to comprehend. I have heard people say IS is no different than any other persecution done in the name of a god. Often, the crusades are mentioned as a way to take Christianity to the same level as ISIS.

Not possible, I don’t think. And one big reason why is THEY’RE DOING IT RIGHT NOW. The Crusades happened nearly a thousand years ago. IS is employing every means at their disposal to get their message out–their comprehension and use of “Western” media outlets is extraordinary.

But it doesn’t legitimize their cause, or their desire for an Islamic caliphate. Sure, the methodology of the Islamic State is not representative of all Islam. They are radicals, without a doubt. Yet I would submit to you that “mainstream” Islam needs to not only issue strongly worded statements, but take strong action against these folks.

I’ve read recently that people are criticizing Chris Kyle for referring to insurgents as “savages,” but I would say to you that if anyone at all is deserving of that label, it is the members of IS.

And the enemy of all mankind.

This is probably going to get a lot worse before anything changes. I don’t know what the answer is, but I am fairly certain it will involve the use of many different projectiles and combustive materials.

I think in this instance, force will need to be applied until there is no more resistance. Problem is, the specifics of this are difficult. How to distinguish one group of people who hate Westerners from another. Perhaps the answer lies in those people of Islam who do not wish to be lumped in with these beasts.

Words are not enough. There needs to be action as well, because talk is very cheap.

Think of me what you will. Yes, in this matter I am decidedly conservative. Perhaps even right wing.

I’m just not interested in turning the other cheek anymore in the sense that pretending the upscaling savagery of these people’s demonstrations of hate and evil are anything but that.

The religion of peace, in my opinion, needs to crap or get off the pot. These IS folks need to be destroyed. It’s what they understand. 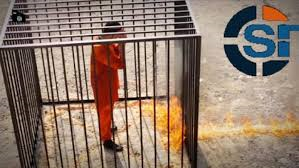