A lot of people don’t think Christmas is that big of a deal, all things considered. It’s a day set aside for good old American-style capitalism, right? Maybe the family gathers, and it’s one of the few days of the year a whole bunch of people who normally don’t go attend church. So that’s cool.

But it’s just another day, right?

Not for me, and not for most folks who believe in what many might call “traditional” Christianity, if such a thing exists.

Here’s why, to my way of thinking.

Before Jesus could learn in the temple

Before he could read the torah

Before he saved the best wine for last

Before he made the blind see

Before he made the dead walk

Before he fed multitudes

Before he healed hearts and bodies and minds

He had to be born.

Now, think about all those things passing before his eyes as he hung there with his head down. Did he know what was to come upon his birth?

We do know that when he cried out “eloi, eloi, lama sabachthani” it was with his heart ripped out in a way that man can never know.

And that was for us.

Been thinking about that ever since Eric shared that this morning in the kids ministry devotional and communion time.

And that’s why Christmas is such a big deal to me. 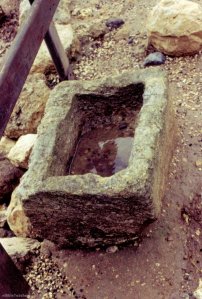