Last night Jenny, her brother, mom and dad were all leading worship at church. Ken and John played guitar and drums, respectively, and they would have sounded good playing anywhere. Ken, Jorge and Jenny sang melody on 2 each of the 6-song set. Linda sang harmony. From my perspective (the computer in the sound booth), it was an amazing and powerful experience, and when Jeff came out to speak it only became more powerful.

Not for the first time, it occurred to me that I wished I had a musical gift, even something like a triangle or tambourine. Or a voice, for that matter.

I sit in the back, and I hit the spacebar and F9, and I watch and listen.

Jeff said something last night about everything you do, do it for the glory of God. That’s what the players and singers were doing. You could hear it in their voices, and see the light of Jesus shining from within.

How am I to use my index finger to the glory of God?

Then Ken said something during his communion meditation, to the effect of “God knows what He’s doing.” I thought about that, along with Jeff’s sermon, for the rest of the night. I’m thinking about it now, with the dogs curled next to me on the couch and the sun just beginning to lighten the sky.

Do everything for the Glory of God.

These things have been running through my mind since then.

I wasn’t gifted with musical or vocal ability, and that’s ok. I may lack the ability to glorify God in that way, but

It kind of makes sense I’m in the back on the computer because while God didn’t give me music, he did give me words. I am most comfortable behind a keyboard, or talking to people.

I have been given some small ability to turn a written phrase, but it wasn’t until I began doing it for the glory of God that I really began to discover that.

Maybe it’s like that for you. You don’t feel like there’s anything you can do well enough in your life to glorify God with it.

Maybe you wish you could play, or sing, or speak in front of people.

I would say to you, there’s plenty you can do. One of the amazing kids in the youth group once referred to herself as a spacebar ninja, and I guess that’s me, too.

And that’s ok. I think now that my problem was that I wanted to be awesome at something people could see, so they would see me, too, and I would feel validated in some way.

It was my Glory I wanted and not God’s.

It took the realization that all things work together for God’s glory to make the difference in my life. I promise you it’s the same in yours. You don’t have to look for some special way to give God glory. Rather, glorify him with what is in your life.

This song, I think, says it perfectly:

Here’s me in action during Jeff’s sermon: 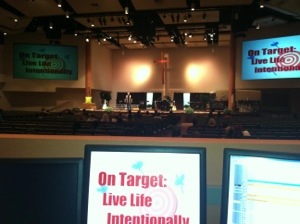