The last thing I remember doing with my dad is watching the season ending episode of Three’s Company back in May of 1984. The next day I got off the school bus and my sister was waiting to tell me he had a heart attack and take me to the hospital.

I don’t like that being my last good memory of him–watching some dumb sitcom. Neither of us liked the episode much. So I try to think of other things, like how strong he was. One time I saw him slide a dryer out of the back of his pickup with his bare hands. Heck, the day of his heart attack, he drove himself to the hospital. That probably bought him a day.

He loved to sail, and collect things, and listen to big band music.

I remember bringing him coffee on Saturday mornings, and running down to the little store around the corner to buy him a newspaper.

I remember he had a rifle in his closet that had a white stock, and a .22 revolver in a drawer.

He made me and my friends rubber band guns one time, and took 4 of us to see Jaws at the old Parkway Plaza theater.

I have two favorite memories of my dad that I cherish, and thinking about them now as I hold my 2 year old and watch Dora makes me realize how important it is I create memories for both of my guys

The first memory is this little routine we’d do as he went off to work (he was a cement mason). He’d say “see you later, alligator.” I would follow with “after a while, crocodile.” I loved that–it was something that was just ours.

The second was spending the night on his sailboat. We didn’t do it much, but when we did it was great. I remember the sound of the water slapping the sides of the boat, and the ding-ding of buoys or something out in the harbor. Then we would go to Jack-in-the-Box and get breakfast while it was still dark.

He might not have been Ward Cleaver, but he did what he could. I wish he could have met my kids–he was really good with them.

Anyway, I need to get busy with my guys. It’s Saturday, and we’ve got things to do! 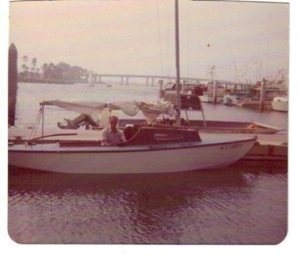