One of the first things I remember is that my oldest sister’s first husband went to Viet Nam when I was really small—probably not much older than John is now. I don’t really remember very much about him. I think he was lucky in one sense, in that he didn’t have to fight. I’m fairly certain he brought home some things from the war anyway, though, that likely didn’t make things easier for him and my sister. He ended up surviving Viet Nam and dying in a car crash when he got home. I remember him carrying me around, and every now and then he would hold me while we ate something together. Life is so strange sometimes.

If I remember correctly, he served as a clerk of some kind. Maybe a driver, much like Radar on M*A*S*H. I’m not sure whether it was before he left or when he got back, but he gave my older brother Tim a box of 45rpm singles and a couple of those disks you had to put on the record player to play them. I didn’t think much of it at the time. The record box certainly didn’t look like much. It was made of peeling, paper covered cardboard with some paisley-looking squiggles on the sides and the bottom. The black top—also covered with paper—was secured to the box with a shiny chrome or aluminum clip. It was in sorry condition, but my brother loved it.

The singles were all oldies, ranging from 50′s artists like Ricky Nelson, Richie Valens, Buddy Holly, Chuck Berry (I used to know all the words to his masterwork of innuendo, “My ding-a-ling”), and many others, to early 60′s music, like Dion and the Belmonts, and Tommy James and the Shondells. The original version of the song “Last Kiss,” by the Cavaliers that Pearl Jam would later cover was in there, too, along with another car crash anthem “Tell Laura I love her.”

My brother would play them for hours on end, and I grew up with the sound of oldies in my ears, along with the country my mom would play (it wasn’t until much later I would be introduced to rock by my older sisters). Yet while I heard these types of music it would be pretty fair to say they went in one ear, and out the other, without making much of an impact—at least at first. They were just pleasant noise.

I’ve mentioned on several occasions the difficulties I’ve had over the course of my childhood with my brother, but in all fairness, he’s pretty much responsible for helping me through one of the toughest times of my life, as well, and I’m fairly certain he doesn’t even know he did it.

What happened was that I was always a scared kid, jumping at shadows, and almost anything else. I would watch the tamest cartoons you could imagine–mostly because they were funny, but also because they weren’t scary. I knew there were darker, more adult forms on entertainment out there, but I was most definitely not interested, at least not until a little before my ninth birthday.

Sometimes my sister’s would spend the night at my house–mostly for holidays like Christmas and Thanksgiving. One time they were there, and watching a movie on TV in the living room–a rebroadcast of The Exorcist. I remember walking into the room just as the camera zoomed in on Linda Blair’s pasty, peeling face and yellow, demonic eyes.

It scared the crap out of me, but it was also somehow fascinating. I think that was my first
look at anything in the horror genre, which to this day both repels and excites me. It wasn’t long after that I got hold of my sister’s copy of Stephen King’s Night Shift and read a short story called “The Boogeyman,”which terrified me to the extent that I could no longer go to sleep at night without first inspecting my closet for demonic, child-killing monsters. And then I couldn’t close my door. Like the people in the story, I had to leave it open–just a crack.

Every now and then, my older son has problems sleeping, similar to mine when I was his age. Sometimes he wakes up from terrible dreams, and then is afraid to go back to sleep again. Maybe night terrors or something. I don’t know. I feel bad for him, but it happens rarely, and he seems to get over things pretty quickly after having a sleepy day.

Hopefully, it will pass. Where was I? Oh, yeah.

I began to read other stories along the same vein as the King piece, and they were all scary, but it was The Boogeyman that stuck with me the most, and very soon I began to develop a very serious case of insomnia. What happened was that every time I would begin to fall asleep, I would see (or think I saw), my closet door begin to swing open, and a slimy, clawed hand scratch its talons along the surface. The first couple nights, I just lay there, too afraid to sleep.

The third night, I crept into the kitchen, figuring that I could find something with which I would be able to defend myself from the claws–somehow, a kitchen knife seemed like just the thing–hey, I was a kid!

So while I stood in the kitchen, searching the silverware drawer for a weapon, I heard my brother’s voice curse softly from the garage (his main hobby when I was little was buying junk cars, fixing them up, and selling them. He did this from when I was 8, until I turned 18). Then another curse, and silence. A few seconds after that, Del Shannon’s Runaway began playing on the record player’s single, battered speaker.

I found a steak knife that looked reasonably well-edged, and sat in the chair by the door to the garage. I listened to Runaway, and then Chuck Berry came on after a couple seconds more cursing (those little adapters for the 45′s were a bitch) by Tim. I ended up sitting there listening to music, and my brother’s swearing at various car parts for the better part of an hour, and eventually went back to bed, falling asleep softly humming Ricky Nelson’s Garden Party to myself.

The next night, I crept into the kitchen again, and took up my position in the chair, listening for about an hour, and eventually going back to bed, singing softly to myself, and once again falling asleep. And again the next night. And the next.

After about a little less than a week, I was able to procure a small transistor radio from my dad’s collection of junk that I would play quietly next to my bed when I hit the sack, and after only a night or two, I didn’t even look at the closet anymore.

Maybe it will be something like that for my son. I sure hope so. Sometimes, it helped me just to know someone else was awake in the house. Maybe that was it this morning. I got up at 4 for work, and he was awake, having had a rough night. I told him he should go back to bed, and he did, after a few minutes. Someone else was up, and he went to sleep pretty quickly after that.

I got to that point after a while.

But it all started with those old records in the garage, and listening to my brother’s cornucopia of profanity. I didn’t even know I liked music before that. And while I will always have some degree of difficulty with my brother, I will also always be grateful to him for helping me find music, and stop worrying about the boogeyman. 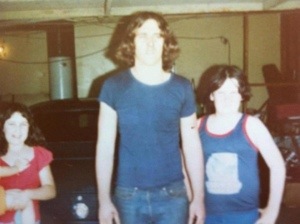