I made breakfast this morning, and it was pretty good. I’d just finished cleaning up, and then Jen was going to go get her toes did. It was time for another dudes morning.

David watched an episode of Lego Ninjas on YouTube while John and I relaxed on the couch with some Barney on the big screen.

John got up and I saw him head toward the kitchen.

“Where are you going, John Ryan?” I asked.

“Daddy will get you a drink.” I got up off the couch and headed to the kitchen while John disappeared around the corner.

I heard the refrigerator door open followed by a crash.

John had opened the door and grabbed onto one of the shelves, which came off the door, spilling the door contents onto the floor, including a glass jar of Alfredo sauce, which promptly exploded.

I got John his dink and planted him on the couch with a fresh episode of Barney, then headed to the kitchen for cleanup: The Sequel.

I got the broom, the mop, and a large bottle of Spic n Span cleaner from the closet. I leaned the mop and broom against the bar and set the Spic n Span on the kitchen table.

I knelt down and began picking up chunks of broken glass, dropping them into the trash one by one and cursing softly under my breath.

I finished picking up the broken glass and wiping up the Alfredo sauce and stood up to get the broom.

No broom, and no mop. I realized Barney had been turned off.

What now? I wondered. I saw this sitting on the table and knew no good could come of it.

I came around the corner and John was standing in the hallway with the broom and the mop at his feet. There was a strong smell of Spic n Span in the air.

In his zeal to clean, he’d sprayed enough cleaner on his chest and arms to completely soak himself, then dragged the mop and broom into the hall to start cleaning.

We headed off for a shire and a bat and had a grand time. It took me another 5 minutes to clean the bathroom. 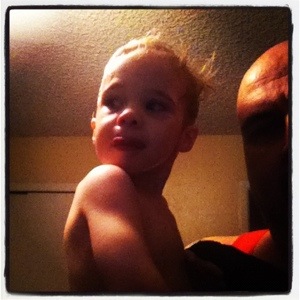 I got him dressed, and we headed back to the scene of the crime. John wanted to help clean up, while finishing his dink.

All of that between 10 and 11. We’re sitting on the couch now and hanging out with Elmo. John is grounded from the kitchen.