My little guy is a jumper (a climber, too, thanks to his grandma’s side of the family). We have these 3 padded ottomans in our living room we use for footrests and toy storage. John has taken to climbing on top of them and then jumping as far as he can toward the couch. 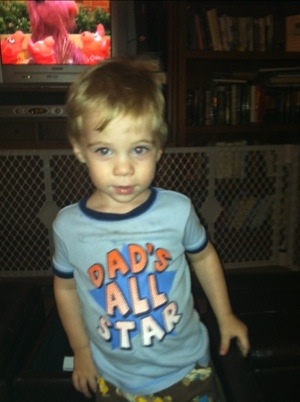 (here he is, right before a leap)

Of course, since he’s only 1, his little legs don’t carry him very far and he usually ends up getting caught mid-air by daddy before he hurts himself.

What struck me the other day was his jump routine: he gets up on the ottoman, and then gets this expression of utter joy on his little face as he launches himself.

He leaps, completely without fear. Into daddy’s arms, knowing that daddy will catch him.

I wish I was like that, especially where God is concerned. I want to take leaps of faith and know that daddy is on the other end of my leap with his arms open. Instead, I often do the opposite.

Instead of leaping, I climb back down off whatever height I’d scaled and I never jump at all.

I need to leap, even if I’m afraid.

I need to trust God to catch me.

I need to put fear where it belongs in matters of faith, or I really don’t have the faith I claim to.

Psalm 56 says: when I am afraid, I put my trust in you. In God, whose word I praise. What can mere mortals do to me?

I need to leap fearlessly, with the faith of a child.

If I’m able to do that, I can move mountains.