If it were just me I needed to think about, I wouldn’t try to change the world. I’ve lived long enough and seen enough of how things always seem to be that I don’t really care what the world “does” to me. I’ve gotten a lot better at taking it.

Yet when I wake up in the morning and when I lay my head down at night I think of these people: 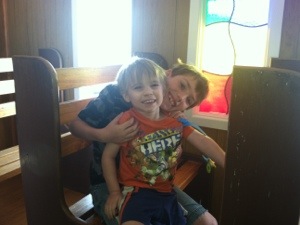 Then I think that what really matters is them, and what I leave behind for them when I’m gone. When I think about them, apathy is no longer an option. I have to care about things because they look to me to learn how to do so much.

How to treat people.

How to treat each other.

How to treat the planet.

I may not want to be an example for anyone, but that almost doesn’t matter. I’ve got two people who need me.

This first was this. I was able to read through Radical, by David Platt, in a single day (what can I say? Setup days always have a lot of downtime) 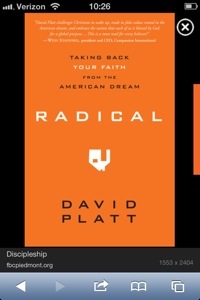 Which made me want to look at this: 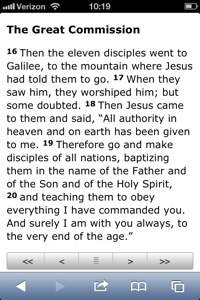 Which in turn made me realize my head had been buried in the sand for a very long time. Any time missions or evangelizing the lost around the world came up, my first instinct was to say something like “that’s great for you, but I don’t really feel called to the mission field.”

What occurred to me this week (thanks to Platt) was that when I beg off spreading the Gospel because I don’t feel ‘called’ to it, I’m taking a very clear directive from Jesus to all believers and making it about whether or not I feel I’m supposed to do something.

But I’m not a pastor, I’d say. Because only pastors have experienced the fullness of Christ and can attest to what redemption feels like!

And the truth about that is so what? The disciples didn’t start out that way either. Jesus took regular people and used them to build a church that has endured for millennia. Fishermen. Tax collectors. Ex-whores.

Just tell your story, man. What did Jesus do for you? How did it feel then? How does it feel now?

Ok, you’re saved. What happens next? I realized I didn’t have to be ordained to tell people those things.

Being the hands and feet of Jesus is a piece of cake–said no one, ever.

If that is true, and I am any sort of believer, and any sort of man, who am I to pass on what is commissioned by God?

“God beckons storm clouds and they come. He tells the wind to blow and the rain to fall, and they obey immediately. He speaks to the mountains, ‘You go there,’ and He says to the seas, ‘You stop here, and they do it. Everything in all creation responds in obedience to the Creator…until we get to you and me. We have the audacity to look God in the face and say, ‘No.”

It’s pretty clear what we are to do. What I am to do.

There are sections of scripture that are troubling to me. Not because I don’t understand what the writer is trying to convey, but because I do–and it goes against everything I’ve learned over the course of my life. Take 2 Corinthians 12, for instance. 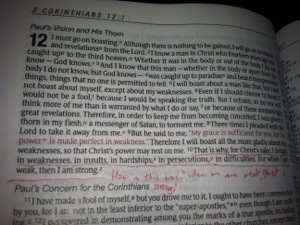 In verses 9-10, Paul talks about boasting in his weaknesses; even delighting in them. That was hard for me to understand, because I think it’s more natural to be ashamed of the ways we are weak. It’s hard for me to imagine feeling delight at my lifelong struggle against food addiction, the desire to binge drink, or my occasional struggles with lust (in the form of wanting to look at inappropriate things). Not that those are my only weaknesses: just what I struggle against most frequently.

Maybe what Paul is trying to say–according to my Life Application Study Bible–is that when we are strong in our abilities or resources, we are tempted to do God’s work on our own. That can lead to pride.

For me, that means if I was talking to someone about resisting the urge to empty a 12 pack or click on the wrong web site and saying that it was easy not to do it, or that I could resist because I was strong I would be full of what my son calls “peepoo.”

I am able (mostly) to resist these inclinations and others because God gives me that ability. Left to my own, I wouldn’t even try to resist. So if I accomplish something in spite of the things I struggle with, it means so much more. And only then am I strong.

It’s interesting how that works, because it shouldn’t. I guess God knows more of my strengths and affinities than I do. Where I see a weak pile of desire, addiction, and sin, God sees something else. And in spite of my own callow nature he is somehow able to use me, and my weaknesses.

Just finished reading an article about Starbucks and their vocal and financial support of gay marriage.

Something occurred to me just now: you hear people speak about this issue all the time, and those against it often mention that legalizing gay marriage threatens the sanctity of the institution itself. Does it, though?

If two men or two women were able to marry each other, would it make me any less married to Jenny? Of course not.

Would they actually be married, though?

It depends on what you believe. If you believe it’s simply the law’s recognition of the institution of marriage that legitimizes it, then making gay marriage legal is really simple.

If you believe that marriage was created and defined by God then the whole debate gets a little more complicated. For me, I do not personally feel my marriage threatened by whether or not those two fabulous guys down the street can tie the proverbial knot. I just don’t.

The problem arises, I think, when the possibility of Churches or individuals who perform (or can perform) wedding ceremonies, and who do not believe gay marriage is solely legitimized by the law are compelled by that same law to perform that which their faith and their God tells them is not legitimate at all.

I think that is a real possibility, and if it happens would be an affront to the religious freedom promised by the constitution of the United States, which was meant to protect states from favoring one religion over another.

So if we, based on law alone, attempt to force people to comply with the viewpoint of secularism over Christianity, or Islam, or Judaism (none of which recognize gay marriage), we are favoring one religion over another, because secularism taken to that level is very much like a religion. Even worse, we are denying the constitutional rights of Americans.

Here’s the other thing I was thinking about: what if what threatens the sanctity of marriage isn’t gay marriage at all?

Think about it. People cohabitate for many years and often do not marry. Society accepts that, and it is now very much the norm. Men and women also frequently approach marriage like they would contract negotiations for a house or car, and it’s no wonder there’s a 50% divorce rate. What else should we expect with such low expectations.

I think what threatens the sanctity of marriage is making marriage about law and only law, leaving sanctification out of it completely (sanctification = holiness). Soon, we will simply specify a desired term of marriage, sign a contract, and that will be that.

Marriages will fail, or never happen at all. Kids will grow up with single mothers (a single mother, by the way, is a noble thing, but they were never meant to shoulder that burden alone), and never have any idea what marriages are meant to be and can be.

I think the sanctity of marriage is also threatened when we make it a business or political interaction and not a covenant.

Should gay people be allowed to legally marry? The law will decide that soon enough, and it won’t be the death knell of the church at all. What it will be is a symptom of the decline of freedom, and the further separation of “church” from “state,” which is really sort of false.

It’s false because as I mentioned before, secularism has become very much like a “modern” religion (or anti-religion) and is being used like a cudgel to beat down those who do not agree with its precepts.

If you don’t conform to the secular status quo, then you’re a relic of a time not fondly missed. Or maybe just a “hater.”

For most Christians, Easter is like the Super Bowl. Not to minimize the importance of Christmas; Christ had to be born before he could be crucified. Most people agree Jesus was born, and lived and taught during the first century around Judea and surrounding areas. There is ample evidence available to support the existence of Jesus.

Where people veer off is when you start talking about the Crucifixion and subsequent resurrection of Christ. There is a huge segment of society who emphatically denies it ever happened, and that Jesus is little more than a benevolent bedtime story.

Then you have one of the world’s most practiced religions (Islam), which agrees Jesus lived and taught, but was in the end little more than a skilled teacher and (according to some) prophet. Here’s a great video that breaks it down:

I am not here today to refute Islam, but it is true that without the resurrection, Christmas is little more than the noteworthy birth of a talented first century Rabbi who was really good with people.

I am also not here to “prove” the resurrection true (read Lee Strobel’s The Case for Easter if you want to do that). I just want to tell you what Easter means to me.

I believe in the death and resurrection of Christ because it is by that I am healed, and live and move and have my being. I can’t tell you anything now that will prove that to you if you don’t already believe.

I can just tell you that Easter changed my life, and has made everything that happened to my life over the past 13 years possible.

Easter took a tired, broken, depressed and addicted man who didn’t care about anything (including his life) and gave him a reason to live and a means to live by.

I guess the best way to explain it is that God took the torn fabric of my life and began stitching it up, along with the otherwise mortal wounds to my heart.

He’s the only reason I am alive today, and whether or not you believe me does not change the truth of that in my heart, bound by the gentle and strong hands of a carpenter.

Easter is important to me because it reminds me of why I’m here.